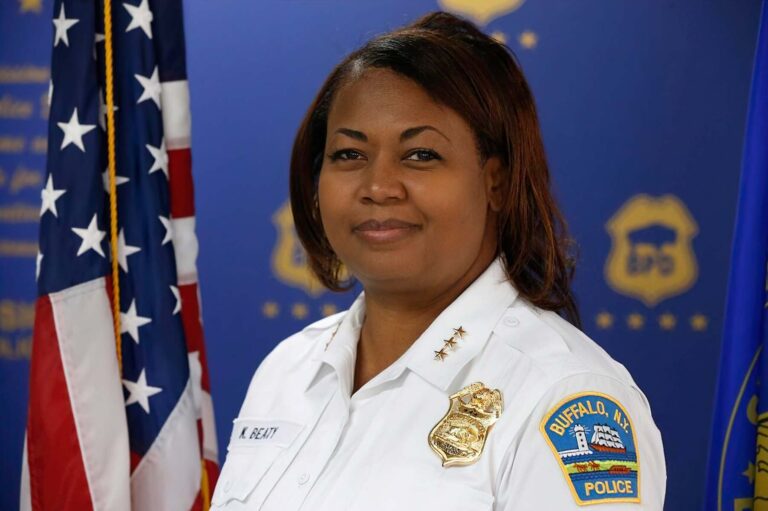 Kimberly L. Beaty has served in law enforcement for the past 34 years. As a lieutenant, she was assigned to supervising 911 Police Communications and recruitment.  Before becoming Deputy Commissioner for Operations and Homeland Security for the Buffalo Police Department, Beaty previously served as Chief of the City’s “E” District, which encompasses the diversely populated Bailey/Kensington neighborhoods, the University of Buffalo, Canisius College of Buffalo, several medical facilities, schools, and business districts.

She assisted communities in addressing crime and disorder problems, by focusing on neighborhood initiative – based projects. Currently, Chief Beaty is the Director of Public Safety at Canisius College.

Training several law enforcement agencies throughout New York State, Chief Beaty works closely with staff at the Erie County Law Enforcement Academy and has served as a consultant in their efforts to promote problem solving strategies in community policing. As a training officer she worked at the Buffalo Police Training Academy for nine years.

Chief Beaty has been certified federally and by New York State as a Domestic Violence Instructor. In addition, she is a certified Master Instructor for the New York State Division of Criminal Justice Services and has trained several other police agencies.  She is certified in Advanced Crime Prevention through Environmental Design, Critical Incident Management, Peer Counseling and Police Mental Health Response.

Chief Beaty has spoken at several conferences on law enforcement and diversity-related issues, community policing and crime prevention. She has been recognized and has been a recipient of several awards for her efforts in community policing, diversity and problem-solving. As Deputy Police Commissioner, she did oversee Buffalo’s five police district operations, homeland security, special events, investigative services and specialized teams. She directed the Buffalo Police Departments training agenda for their officers.

Appointed in 2018 as Director of Public Safety at Canisius College, Chief Beaty is the first woman to serve in this capacity. She is a member of the Crisis Response Team, Bias Resource and Response Team and Behavioral Intervention Team.

• Graduated from Canisius College of Buffalo New York with a Bachelor of Arts degree and served in law enforcement for the City of Buffalo Police Department for 31 years, moved through the ranks and appointed as Deputy Police Commissioner (Operations & Homeland Security), 2014- 2018

• Previously served as Deputy Police Commissioner of Operations and Homeland Security,
Chief of Patrol, E-District Police and as supervising Lieutenant, 911
Communications/Dispatch and Recruitment.

• Facilitator for the Law Enforcement and Diversity Training program on “What to do
when stopped by the Police” and has worked with United Neighborhoods and the
University of Buffalo on the “Strategies to Reduce Racial Profiling: Buffalo New York
Study Circles Project funded by the Department of Justice COPS Office.

• Trained several law enforcement agencies throughout Erie County, served as staff at the
Erie County Law Enforcement Training Academy and have served as consultant in their
efforts to promote strategies in community policing.

• Certified federally and by New York State as a Domestic Violence instructor.

• Continues to serve as police instructor and certified Master Instructor for the New York
State Division of Criminal Justice Services and has trained several other police agencies
and has spoken at many conferences on law enforcement and diversity training issues,
community policing and crime prevention.

• Recipient of numerous awards and recognitions for professional police service.

Attended and presented professional workshops at training conferences, seminars and symposiums on the listed topics

Mayor’s Award of Merit for Heroism
City of Buffalo, 1999

Medaille College, Professional of the Year 2018

Girl Scouts WNY, Board of Directors

We Need You Involved.